The Day(s) after Totality

In 1918 a total eclipse visited Idaho, and the path of totality was just a few miles south of our own 2017 phenomenon. My Great Grandmother Just wrote about it in her diary. The family had traveled to be with friends for the occasion. The eclipse arrived late in the day. She wrote simply: “A jolly time, all were so happy.”

That’s a fine description for our 2017 experience as well. Nearly 100 years later we gathered at my cousin’s house which has a good view of the mountains and the Snake River Valley below. It was a festive atmosphere. As we waited and watched, I ran in and out of the house tending my crock-pot potatoes, losing my eclipse glasses often, only to pick up random pairs that were lying about for just such an emergency.

As the time neared, we saw that the dappled light coming through the trees had turned into a sprinkling of crescents. The light turned the color of honey, the air cool. We put sweaters on over our summer clothes. At seven minutes to totality my sun-sensitive glasses went clear. And along the horizon behind us a “storm” of violet-grey appeared.

As the slide to totality commenced, I couldn’t sit still and climbed over the fence to the horse pasture. Seth and Leah followed. Then we were caught up in the wonder of it. The moment our glasses went black, we threw them off to see the moon surrounded by a halo of light. Totality is a 360 degree experience. Stars appeared and we threw up our arms and turned in circles and cried and whooped. I agree with someone who called it a “primeval thrill.” It was grand!

Then, oh so quickly and much too soon, the “diamond ring” appeared as the sun gleamed out on the opposite side, and within seconds the impalpable half-light was back and the lunar march across the sun continued.

We immediately felt a kinship with those around us who had experienced the thrill as well. We shared the day with family and with strangers from Minnesota who had been planning the trip for three years and by chance ended up in Idaho.They were delighted to have found the perfect hillside for viewing the excitement. We’ll never see them again, but we are strangers no more.

When we returned home, an unexpected line of traffic, no doubt helped by Google Maps, sped past the ranch on our own country road in an attempt to bypass the interstate and highway.

That evening I lingered outside at dusk to see if the rays of the setting sun resembled those of the eclipse. Was it this dark, I wondered? How about now? But day by day, nature doesn’t replicate the ethereal light of a total eclipse.

Some called it God’s handiwork. I can buy that, but let’s not forget the lowly human scientists who predicted the eclipse to the minutiae of detail. It’s science that figured out the moon is 400 times smaller than the sun. And the curious fact that it is 400 times closer to us, which means the two orbs are the same size when viewed from Earth as their masses overlap.

I can only imagine Grandma Emma’s eclipse experience. They did have "solar" eyeglasses in 1918 and smoked glass for viewing, but who knows if the aids made it to rural Idaho. I do know they didn’t get home until 11:30 pm that night so would have traveled home in the dark, perhaps by buggy. And surely with a newfound sense of awe. She also said they used their first ice of the season on that warm June day. Cut from the river during the winter and stored in the ice house, then brought out for just such a celebration. Imagine!

Since the eclipse, I have been appreciating our dawns and dusks anew. Our planet spins on its axis to create day and night. It orbits the sun to create the seasons. And all around us an incredible diversity of life has evolved in sync with those cycles. Bats and owls and nighthawks soar in the darkness. Nocturnal mammals, the raccoon, badger and cougar prowl, as we homo sapiens on an opposite cycle, sleep. And seasonally, grasses drop seed and go dormant, squirrels and bears hibernate, insects burrow, and songbirds and whales migrate. Let’s not forget this feeling of majesty and mystery we were lucky enough to witness, and step back in honor of a solar system that makes it all possible. 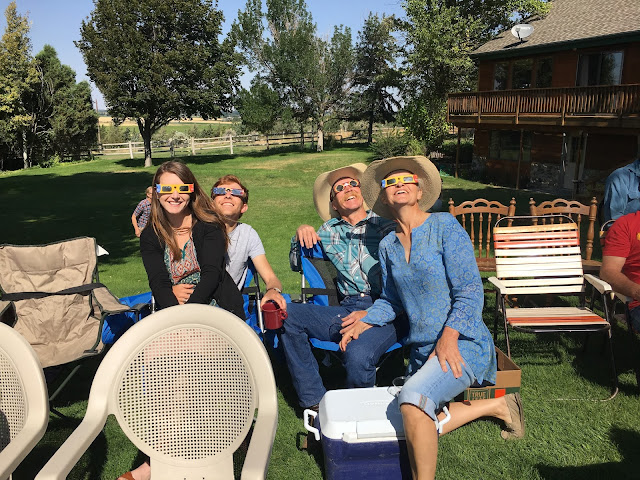 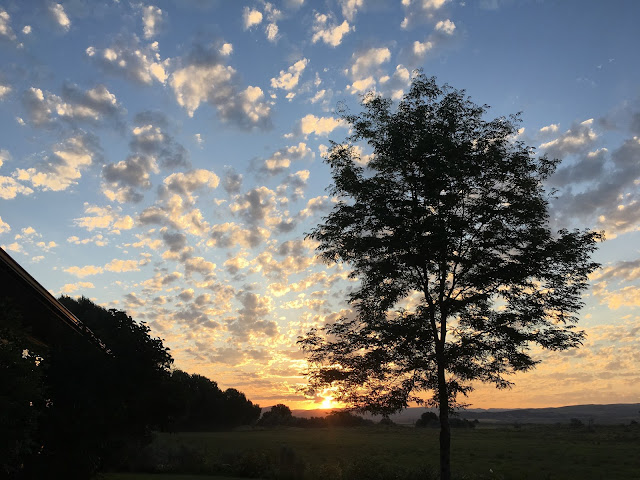 Heads up for Fall

The change is upon us. I only cracked one window last night and it was sweater weather yesterday. Oh, the deliciousness of it.

We woke to a bank of mist that moved across the pasture in front of our house before it dissipated as the sun rose. Mark said it was a sure sign of fall. I heard the word "rhapsodic" today. I don’t remember how it was used, but I can think of no better term for this full-up time of year.

Anna visited for the weekend and I sent her home with a care package of green beans, beets and little red potatoes. August is good garden fun. The taste of a fresh-from-the-garden vegetable is exquisite, but it’s also the texture. I asked Mark to describe it, but I answered for him as usual! The adjectives that come to mind - creamy, buttery - soft but not mushy, firm but not tough, perfectly tender.

I picked my second batch of beans for canning this morning. I had to lift the renegade cucumber vines off the bean plants to get to the fruit (or vegetable as it were). This time of year we always quote Midwestern humorist, Garrison Keillor, who describes an overgrown garden as x-rated. “Lots of lewd groping going on out there!”

As I picked beans, the bees were loving the cilantro, overgrown now and blossoming. I thought to myself that if everyone had a garden they would understand why we need to let plants express themselves in order to feed bees. We would also know why farm labor is different than non-farm labor and should be flexible in regards to overtime and piecework pay. Harvest must be timely because vegetables and fruit are ready in a very narrow window and quickly out run their prime eating quality.

So many lessons to be learned between the rows of a garden.

Mark made some kids happy at the local 4-H fair by purchasing a lamb and a hog which will be processed at the local butcher shop. I gave them my cutting instructions for the pork yesterday: “four chops to a package and leave the fat on.” Things are shaping up for winter.

We shipped the last of the heifers to Oregon for finishing. They’ve been grazing the home place all summer. Mark has been moving electric fence around to make our pastures smaller and allow for better utilization of forage and longer recovery periods for the grass. Additionally, when cattle are confined to a small area they feel competitive with one another and consume weeds better. I like to follow them around taking pictures of different “treatments.”

The plant life, both grass and weeds in some cases, bounces back after a quick graze. Pulsing roots and taking carbon from the atmosphere is engaging stuff. Just doing our part for climate change.
Who knew cows were like most of us and our endeavors, we can be part of the problem or part of the solution depending on HOW we do it.

The first week of August is the beginning of the end of summer. July cruises along, day after hot and sweaty day, with no end in sight. Then, all of a sudden, it’s August, and the morning air has a new snap to it and you know summer is winding down.

We’re sleeping in the cool of the basement. We sleep in the green room, which was Callie's bedroom and then Anna's. There’s a window just above our heads and we listen to the crickets and feel the cool night air. It’s a mini-getaway that we retreat to each evening.

Mark and I took a day to ride through the Portneuf Wildlife Management Area. What a change to load the horses, drive on the interstate, have lunch in town, and then unload the horses - with no cows in sight! We’re always interested in what “rested” from domestic grazers looks like. If you look across the grass, it appears tall and abundant. If you look down you see a scant stand, old grass from years past, and too much bare ground. We talked about whether it could be improved by strategic grazing. It’s steep and water would be a challenge, but it would be fun to try. One thing is for sure, even rested land has weeds.

Considering all the bottom land we humans have taken from wintering wildlife, it's good to know this 3,000+ acres is reserved for them. I'm glad Idaho Fish and Game had the means to acquire it.

The garden has exploded. Every year I tell Mark my garden is kind of sad. His response is, “yeah, you always say that and it always turns out.” And he’s right. By August the rows are growing on top of each other and we can’t keep up with the vegetables. I love ignoring the produce section of the supermarket - except for the blueberries and melons, of course.

I’ve been doing battle with barn swallows over who’s in charge of our front porch. We watched them fledge their first five babies from a nest right over the front door, which we enjoyed. I cleaned that all up and thought that was the end of it, but no! We then had a week-long power tussle when they wanted to re-nest. First I put up a big ladder and a mop with a hat on it stuck on top. When that didn't work I anchored grocery sacks to the beams. Then a colorful kite with a long tail. I finally compromised - or got tired - and let them use the south-facing crosspiece where the mess they made would end up in the bushes. Talk about determined!

We had a good morning collecting blood samples from the heifers with help from my sister Becky, a retired vet technician. We started at 6:00 am and were done by 9:30, so avoided the heat. We sent the samples to my niece who has a home-based lab in Emmett, Sage Labs, for analysis. Seth took the morning off to help us as well, so it was a family affair all the way around. Sage sent the results today and now we know who’s pregnant and who’s not and can make marketing decisions based on that information.

July is good for lots of things. The calves are blooming. The garden is bearing. It’s the only full month I paint my toenails and wear shorts. I hate to see it slip away. 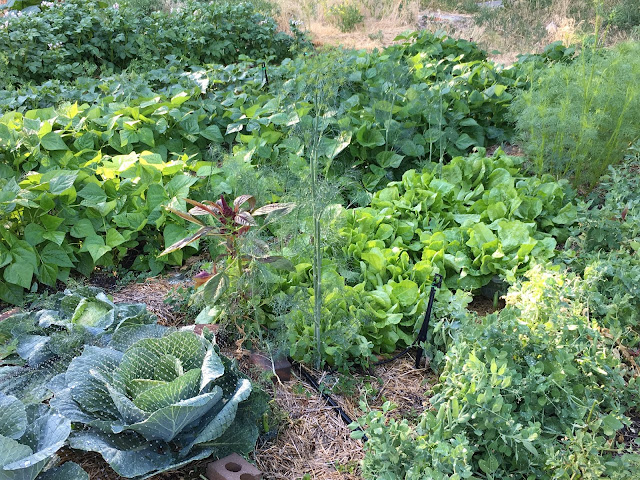