When it’s sub-zero, everything is doubly difficult on a ranch. The water troughs need chopped daily and the ice thrown clear, the trucks and tractors don’t want to start, and everything creaks and groans with the weight of cold. Including us, of course.

I feel bad for the livestock, but if they have enough feed and a good drink they’ll be okay. We methodically make our rounds each morning to every herd, feeding and tending water, and don’t expect to do much else during the day.

I ran into a friend, a fellow rancher, in town, and asked him how they were doing keeping the cattle and sheep tended. He said, “Don’t do it!” I laughed and replied, “It’s too late!”

I walked to grandmas in a face mask on the coldest day. Mark drove by as I was headed out the driveway and said he didn’t think I was tough enough to make the walk. Humph! As I walked, I heard loud popping noises coming from the neighboring field. At first I thought it was goose hunters, but then decided it must be ice breaking on the canal. The sound was stiff and hard and beautiful.

Mark caught a mean virus and had to sleep in the recliner last night to get a breath. I hate when he gets sick and still has to be out in this every day.

Callie made it back to New York City. That seems like forever away. As we were headed to the airport we talked about her “vacation.” It was mostly family parties and tending cows.

We moved cattle on Christmas Eve which was an event. It was going swell until the last leg when the cows discovered alfalfa under the snow and spread out far and wide grazing. The kids were on foot and got caught too far from the pickup and trailer which housed a horse and a 4-wheeler, brought along for just such a situation. When I finally got there with the back end and my dog to help, they were exhausted and mad. We got the cows put away, but it was with much gnashing of teeth. Now it’s only another memory of another Christmas. At least the kids were together, fighting the same battle.

Christmas on the Ranch

The cows made it home for Christmas. It takes three days to gather the field and walk them down the county road. They string out single file to avoid the icy roadway and we can usually get it done with one horse, which may spend all day in the horse trailer if she’s not needed. I’m a chicken on horseback in the snow and it’s almost impossible to dress warm enough in the winter riding a horse. I would rather walk and work my dog.

One morning Mark dropped me off a couple of miles back from the herd to bring along two stragglers. It was lovely, just me and the cows in a desolate winter landscape. The only sounds were the rustle of our feet treading through the snow and the low murmur of the river in the canyon below us.

On the last morning when we had entered the realm of farm ground, the herd discovered lush winter wheat under the snow. Kate and I had a good workout getting them lined out again. Kate flew and I trudged. It was great fun.

The older I get the more I love to walk. And it's not a problem keeping warm, just the opposite. Mark has always said I have a three degree comfort range, and that was before menopause. All you fifty-plus women out there, you know what I mean. Whether hot or cold, you’ll know what state I’m in depending on how much outerwear I’ve shed. If I'm carrying part of my clothing, in a few minutes I’ll be cold and have to layer it back on again. Guys have it so easy.

The kids made it home too. We went to the local production of “A Christmas Carol” last night. It was storming and we almost talked ourselves out of going, but were so glad we went. It was a first rate production in a small old-timey theatre. This 1843 story never gets old; in fact it improves with age.
The actor that played Scrooge was as good as any Broadway star and Tiny Tim and his timeless,”God bless us, every one,” never gets old.

We're looking forward to working outside together during the day and games and good conversation in the evenings.

Worship, for a Change

We have a nice snow cover which feels very Christmasy. Christmas is slowly taking shape inside as well. Seth and Anna arrive today, and we’ve waited to bring in the tree until they’re home. I love the, “Oh, I remember this!” that happens when the kids do the trimming.

With the frigid work of caring for cows ongoing, I had an enjoyable change of pace taking Grandma to church on Sunday. She’s a practicing Episcopalian who doesn’t get to practice much since she gave up her car. She was afraid no one in the congregation would remember her, but of course they did. We entered through the blood red doorway and were welcomed warmly in to their tiny community.

The Episcopal service is very participatory. Bonny’s eyesight isn’t too good, and I was lost trying to find the hymns and chants in the books tucked in the rack in front of us. As I was going back and forth between the hymnal and the prayer book, I turned to the fellow behind us with a questioning look. He cheerfully exchanged books with me as he was already on the right page. He would do this a couple more times before the service was over.

I have never been a churchgoer. My folks taught by example and provided all I needed as a kid. But still, I hated having to say I was a “nothing” when the other kids at school asked me what religion I was. Mark was raised like me, so it was natural to do the same with our own kids. I’m sure they had the same issues at school being different from their peers. Anna had the right idea when she told her teacher she was “home-churched.” Brilliant.

Grandma Bonny never forced her religion on anyone, but she did the kids a good turn when she enrolled them in bible camp over the summer. The camp was hosted by a different Christian denomination every year so the kids got comfortable with the Episcopalians, the Lutherans, the Catholics and the Methodists. Now wherever they go they’re at ease visiting local churches. Or not visiting them for that matter.

Thankfully I am comfortable as an adult, as a nothing. I don’t have to be a “believer” to believe in the power of faith and prayer and community. However and wherever each of us finds peace and comfort is good with me.

The best part of the service on Sunday was "The Peace," that time before communion where parishioners turn to one another in greeting. Handshakes and hugs are shared and wishes of peace exchanged. So fitting for the season. “Peace be with you . . . and also with you.” 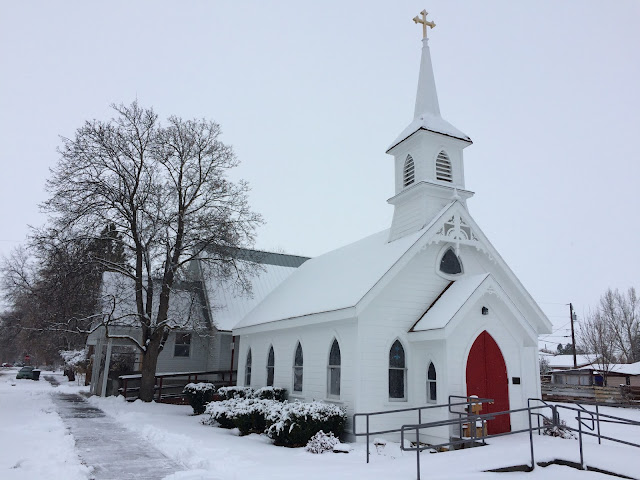 Get Up and Move!

The breeze has been coming from the north for over a week. That means it’s cold. The other 99% of the time it blows out of the southwest and is much kinder.

We marked a milestone during Thanksgiving week – 25 years of marriage. We didn’t really celebrate, just enjoyed having the kids home. We’re trying to think of some grand purchase to mark the occasion. Our bedroom furniture was second-hand when Mark moved out of his parents’ home 27 years ago, and still shows the permanent marker scribbles made by Seth as a youngster. Our TV was new in 1988. I’m still waiting for steps off the back terrace instead of a rotting stump. But those things don’t matter. We’ll tend to them eventually. I truly want for nothing. Nothing except time to do everything that interests me.

We emptied the mudroom of warm clothing to get the kids outfitted to move cows from our highest elevation pasture with 10 inches of snow to a lower pasture with about 5 inches. We took the four-wheelers which we can load in the back of the pickup instead of dragging a horse trailer through the snow. The machines are handy for sure, but we use them judiciously, preferring to use horses for most jobs. A horse needs to be needed. Use a four wheeler too much and your horse won’t be any good the day you go to saddle him.

We had the mountains to ourselves and as the rest of the crew tended elsewhere, I brought up the drag with the dogs, Nan and Kate. Snow herding with dry cows is the quietest of jobs. The herd especially enjoyed the bitterbrush and I was happy to walk through the snow urging the dogs out around the wanderers.

The morning of our anniversary, before the kids arrived to change the empty nest dynamic, Mark and I laid in bed in the dark and talked over memories from a quarter of a century together. First I cried because it went so fast. Then we laughed when I talked about Mark’s naiveté when he married me. I'm sure he thought it would be easier than this. Oh, to find out the vagaries of a woman! A "tiger by the tail” comes to mind.

Someone said (actually maybe it was me): “Look for your mate with a magnifying glass, but look at your mate through rose-colored glasses.” Mark does that for me. One time he said, “I don’t see your faults.” But that was a long time ago. Now he could make a list! Let’s just say he glosses over my faults. And that is a gift. Not silver perhaps, but precious nonetheless.