One of our marketing cooperative’s biggest customers, Whole Foods, wanted to show their customers that there are, in fact, real ranching families behind the Country Natural Beef label, not some corporate behemoth. We were asked to host a film crew for a day to video us working cattle and talking about our ranching philosophy. I very hesitatingly said “yes” to the proposal.  What would we have to offer them?  Surely there were more scenic sites within our cooperative, with people more eloquent than us to feature on a video!  But as I am learning to do these past few years, I took a big gulp and said okay.
Kate works for Whole Foods in the Durham, North Carolina area.  She is originally from Mississippi.  They flew her clear to Idaho to video our ranch. The film crew came out of Jackson Hole, Wyoming.
Mark had to throw the saddle on my horse “Mater” twice to get the shot right.  When “Sly” stopped leading nicely to eat on a willow tree, that shot had to be retaken.  We stopped and started, waiting for the crew to re-group, time and again.  I was quickly learning to appreciate all the angles and vantages that are filmed and spliced together to make a movie.
We moved the bulls from one pasture to the next, and as they went through the gate, they bucked and played, fought and ran.  As we loped around them, I knew this wasn’t the picture of low-stress cattle herding I had hoped to show on the video.  Finally the cattle relaxed and went about grazing.  As the crew interviewed Mark with the bulls in the background, I kept the animals within the view of the camera, tucking in this side then that.
We visited grandma Bonnie at ranch headquarters.  They interviewed her and even stopped for coffee time around her kitchen table, a ritual here on the Pratt ranch.  We shared barbequed beef sandwiches for lunch and worked ‘til nearly dark.  Kate got to ride Mater, and everyone seemed pleased with the way the footage came together. 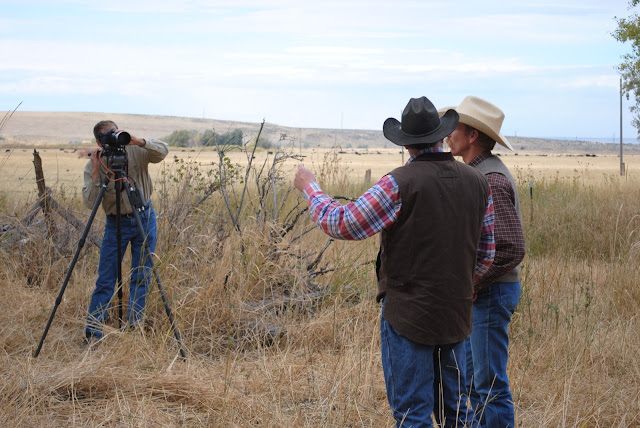 Jesse, the audio portion of the crew, really got interested as he heard us explain the art of conservation ranching.  He admitted to never eating meat, but our story of sustainability melded perfectly with his personal philosophy.  He was totally surprised to find we had so much in common.  He said he was going back home and tell folks to eat our meat!

The streets of downtown Indianapolis were clogged with over 50,000 FFA members this past week, and our family was among them.  It’s quite an experience to witness a sea of their trademark blue jackets everywhere you go, in the mall, in every restaurant, around every corner.  And on every kid's back was the name of their state and hometown chapter proudly displayed in big gold letters.  They massed at every crosswalk, then took their turn as the light changed.
The girls’ uniform consists of a black skirt with black nylons, the same blue jacket the boys wear, a white collared shirt and a feminine royal blue tie.  Our Anna said she felt more respected when she was in her “official dress.”  We went into Nordstroms to get an extra pair of black nylons.  The sales lady had a stash behind the counter for just such emergencies.  What a contrast from the droopy jeans look that most  teenagers wear.
Our son ran for national office, a grueling effort with months of preparation.  When his name wasn’t called, I didn’t feel as disappointed as I expected.  Oh, so that’s how it turned out, was about all I felt.  After the officers were announced and the convention came to a close, he said his goodbyes and came to us from across the emptying stadium, gave us another good long hug, and that was that.  He says he’ll run again next year.  For the past 5 years he’s given his best to the FFA and I expect he’ll give it a couple more.  The organization has helped create the man he is, given him courage, opportunity, the gift of service. 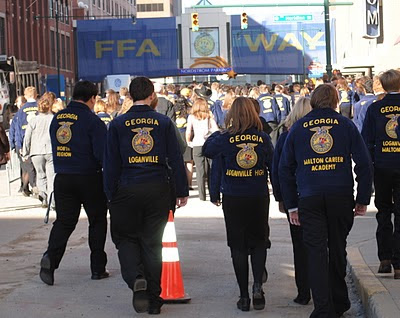 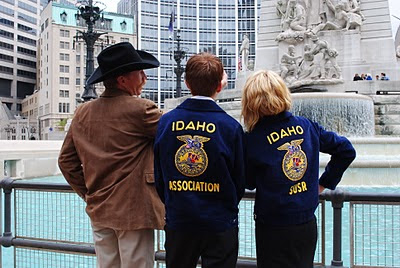 The state and national officers are the stars of the FFA.  I asked Seth once why that was.  I was thinking that they needed to feature the common member more.  What he said rang true.  “You have to remember who they’re inspiring, Mom - a bunch of highschool kids who need heroes.  The officers wear the same jacket they do - they see themselves up there on stage too.”  And he’s right.  The officers are farm kids just like Seth.  They share his heart for the job.  I wish them a great year ahead.
Posted by W. R. Pratt at 3:30 PM No comments:

It’s always a joy to put cows on fresh pasture, but there’s something almost mystical about fall feed. The days can be hot, but the evenings are crisp and cold.  There's a clarity to the air. We regroup not only the herd, but our lives; take a look back and a look ahead.
Summer is taking her last draw, the cured range grasses are yellow and lush - the water, crystal clear.  It's a bittersweet shift, for winter is staging her descent in the background and we may return sooner than expected if the snows come early. 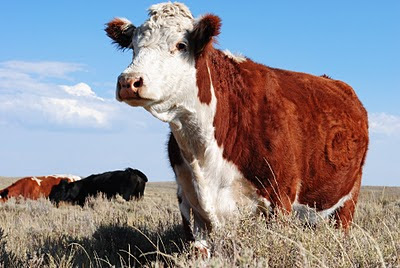 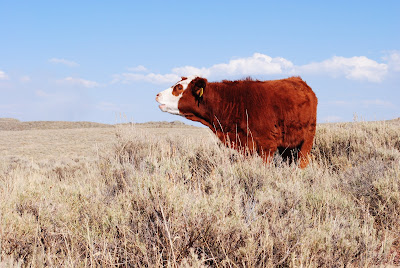 We moved cattle to their fall pastures on the last two weekends.  First the cows and calves on an uncomfortably hot day, over the mountain to Meadow Creek country.  We do our best to practice low-stress cattle handling, but we found ourselves reverting to old methods as we pushed them begrudgingly up the steep incline.  They seemed more interested in going back or staying put than any forward movement. At days’ end, we were totally spent, as were our helpmates, the dogs and horses.  Who’s stressed now?
Then the heifers went to their new digs up along Ross Fork, high above the city of Pocatello.  We processed them first, preg checking and vaccinating.  Then we saddled up to make the so-called “short” drive to the fall pasture.  What we thought would take an hour stretched to three, the heifers tired and hot.  We traveled up, and up some more, and finally dumped them in a thicket at sunset.  As we headed home in the dark, we crested a hill to see the sparkling lights of the city laid out in the distance.  And above that, a bank of clouds and the slim crescent of a new moon.  For a moment the silhouettes of cowboys jogged against the sky.
This life we have chosen, or rather that chose us, is at once sublime and wearisome.  Just when I think I’ll retire and let Mark hire his help, I get a reawakening . . . while watching cows wrap their tongues around native bunch grasses, or riding home towards a panorama of city lights.
Guess my love/hate relationship with this ranch is on the upside tonight.
Posted by W. R. Pratt at 9:39 PM No comments:

Mom’s funeral was one week ago today.  One week, and so much changes and so much stays the same.  She had been fading for a month and a half – decided she was done eating.  And she drank only when we asked her to.  And so we watched her light fade, hard as it was.  She remained calm and seemingly content, a remarkable woman with no regrets.  She said to me just three short days before she died, “I’m okay.”
And so we stood on the precipice between this world and the “other”; we felt the power that only those that accompany death receive.  I wish I could hold on to that unnamed enlightenment, but it grows weaker by the day.  Still, I fancy that I am changed.  That I have left behind fickle tendencies, matured somehow – more aware of what actually matters in this life.
I can’t explain it entirely, but when the mystery was in my hand, when my Mom was taking her last breaths, in and out, I felt that all was as it should be.  The glorious unknown was playing its hand - and I was witness.
My daughter emailed me from New York City.  She said simply, “there is beauty in endings.”  And so it is true . . . but why?  Perhaps it is only in the ending that we truly embrace and appreciate what we had – and what we still have.  It is in the margin between life and death when that life becomes most precious, most remarkable.
I told her that last morning, “You can go, Mom.  We’ll take care of Dad and we’ll be okay.  Everything will be all right.”  Whether she heard me or not, she was gone soon thereafter.  My sister was sitting with her, and I was walking out in the pasture with Dad when she died.  We had walked past the trees Mom planted and stopped briefly to gaze out towards her beloved mountains.  And when we returned to the house she was gone – like the words said about artist Charles M. Russell’s cowboys, “gone far and grazin’.” 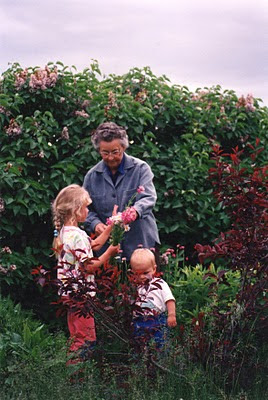 Mom sharing her love of flowers with
my darlings
Posted by W. R. Pratt at 7:18 PM 1 comment: